Sam joined the service in 2016 as a part time Programme Officer and originally co-facilitated programmes to adult victims of domestic abuse on a weekly basis. The role was developed as part of a research project aiming to test the impact of a co – gendered facilitation team on outcomes from victims.  Sam quickly became a key member of the team and his role was expanded to full time with the additional role of Youth Respect Officer being added. This role involves working with young people (11-18) who are displaying abusive and controlling behaviours towards their parents and/or intimate partners. Sessions are usually conducted on a 1-1 basis but Sam also co-facilitates a Youth Respect Group for some of the young people. Prior to joining the service Sam has gained experience in both facilitation and youth work from various roles. Sam is currently a member of the Gwent (Ask and Act) Regional Training Consortia and has a Degree in Youth and Community Work.
Posted by Phoenix Domestic Abuse Services at 18:00 No comments:

I BLAME THE PARENTS!

Who is to blame when teenagers are violent and abusive? Society? School? The media? Hormones? Are they ‘born evil’? Or are their parents to blame? Even then, what about the nature versus nurture argument? I bet you have an opinion about it, I know that it’s something regularly discussed in our office. It’s a massively emotive subject and one that cannot easily be answered without someone saying ‘ ah but, what about…’. It’s complicated even further for those of us with children with a difficulty separating our own feelings of responsibility for our children’s behaviour from the horror stories that we hear about children committing horrendous acts of violence and abuse towards others. The other week I was watching a TV programme about the horrific torture and murder of James Bulger 25 years ago, and couldn’t help but hold the parents mostly responsible for the action of their sons, in fact I felt incensed to seen the fully grown men making threats directly towards the boys and throwing themselves at the vans they were transported in, can we really hold a ten year old fully responsible? It’s all too easy, I think, to sit in judgement of others and search for all the things that separate us from those terrible parents who obviously just don’t care where their children are, or what they are doing.
So what about when this abusive behaviour is directed at their parents? One of our projects deals directly with this issue, providing interventions and support to those families experiencing adolescent to parent abuse. For those of you that think that we are working with young people who are ‘acting out’ in a way most teenagers do, please believe me this is not the case. Some of these young people use all the tactics of adult perpetrators of domestic abuse to control their families. We see significant incidents of physical, emotional, financial and even sexual abuse, that often go entirely unreported to anyone. One of the things that shocks me the most is that, after reading a referral filled with stories of a mother feeling afraid to do anything for risk of physical reprimand and younger siblings being terrorised and controlled, we are greeted at the door by an angelic looking twelve year old, who looks more like they should be writing a letter to Santa than facing removal from their family home as a protective measure for others.
So who is to blame? I am afraid there isn’t an easy answer to that although there are patterns that we see too often for it to be mere coincidence. The families that we see have, more often than not, experienced significant trauma in the past. This trauma can vary and includes incidence of parental substance misuse, mental health issues, serious illness of a parent and bereavement. However, the most common cause, by far, is domestic abuse between parents. From this, we think, things can develop in two different ways.
The first, which we have seen in male and female young people, is when a young person ‘steps up’ into a parenting role themselves. This can be seen as really helpful at first with them taking on responsibility for caring for siblings, cleaning, cooking and often becoming the emotional support for the parent who is stuck in the aftershocks of the trauma itself. This can go on for some time with the young person feeling more and more powerful and simultaneously losing confidence in the parent’s ability to protect and provide. This will generally come to a head when the parent manages to make improvements and tries to regain the position of ‘head of the house’ resulting in resistance and a battle for control.
The second group we see is predominately, if not exclusively, male and seems to arise mostly when they have been witness to domestic abuse directed from their father towards their mother. In these cases the relationship has ended, sometimes dramatically, with criminal action, imprisonment or no contact with their father, where there is contact is often very acrimonious with on-going harassment and intimidation. It seems, in many of these cases, the boys have learnt that, as a male, they have the right to be dominant in the home and women should be obeyed in the home.
For parents in either of these situations it can be really hard to admit what is going on in the home, they are often wracked with guilt about the things their children have been exposed to, disempowered as parents and have little or no confidence in their ability to protect. They feel frightened that asking for help will cause people, and service, to judge them. Yes they may be guilty of over indulging their children, or having weak boundaries and little in the way of consequences being enforced, but let’s make sure we consider the path they have taken to arrive there. We’ve seen mothers who have worked hard, with support, to end violent relationships and prove to social services that they can protect their children, only to return to us years later in desperate need for support as their teens behaviour can no longer be hidden and has become dangerous to others and themselves.
So who is to blame? The answer, as I said, isn’t an easy one, but I think it is something that we all need to be more aware of, as those little comments we make when giving our opinions in the office or with friends, can make an already isolated, disempowered mother, even less likely to seek support.
Posted by Phoenix Domestic Abuse Services at 17:00 1 comment:

On Wednesday 7th March 2018 we invited current and past service users to focus groups at Phoenix House to obtain feedback on our services. Service users also discussed gaps in services which could potentially help to shape the future direction of our work here at Phoenix DAS.
We would like to thank everyone that took the time to contribute to these focus groups. If you would like to get involved in providing feedback on our services please do not hesitate to contact us. 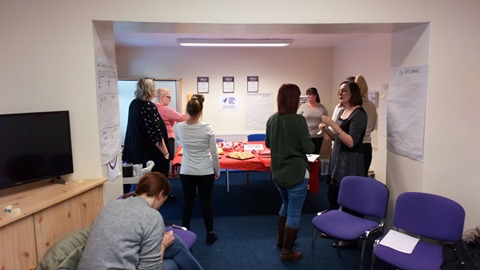 Posted by Phoenix Domestic Abuse Services at 17:00 No comments:

Charlotte joined the service in August 2016 and has taken the role of Youth Respect Officer. Charlotte works with young people (11-18) who are displaying abusive and controlling behaviours towards their parents and/or intimate partners. Sessions are usually conducted on a 1-1 basis but Charlotte also co-facilitates a Youth Respect Group for some of the young people. Prior to joining the service Charlotte has gained experience from various roles including domestic abuse youth worker, detached youth worker and working with homelessness and mental health. Charlotte has gained experience of creating and delivering programmes for young people that have been victims of domestic abuse and dealing with Trauma. Charlotte is currently a trustee and youth lead for a newly established charity “Bags of Hope” which aim to provide support for young people experiencing the care system. Charlotte is also a qualified youth worker.
Posted by Phoenix Domestic Abuse Services at 14:03 No comments: